Southampton Small Engine Sales & Service specializes in the sales, service, and full repairs of all models of small engines and is an authorized Husqvarna Dealer.  Our commitment to delivering great products backed by a service department that will work hard to ensure that your equipment works without problems, day in day out.   Why did we decide to provide Husqvarna?    The Warranty and The Story 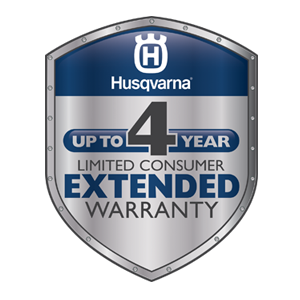 Husqvarna has developed an extended warranty program to help you get more mileage out of your handheld products. Read more about the Extended Warranty Option Here

The Husqvarna Story:  4 centuries of innovation

What makes a Husqvarna? How come people all over the world expect a certain feel and finish when picking up, or getting on, a Husqvarna product? We’d like to think that our significant experience has a lot to do with it – of which we have almost 400 years. Here’s how Husqvarna became Husqvarna.

1620-1689: Setting Sail   Husqvarna was founded as “Jönköping Rifle Factory” by decree of the Swedish king, and during the first years the factory produced about 1500 musket pipes annually. The signature product inspired the classic “gun sight” logo that, although updated, is still used today. When Sweden began to boost its army in 1689 the company started a separate site for boring and grinding musket pipes 7 km from the head office in Jönköping – at Huskvarna falls (formerly spelled Husqvarna). A place that now marks the spot for the modern Husqvarna factory complex.

1757-1850:  Becoming Husqvarna  The Crown transfers the company to a private owner and the name changes to ”Husqvarna Rifle Factory”. By 1850 all production has been moved to Huskvarna.

1918-1919:  The first lawnmower  Husqvarna acquires “Norrahammars Bruk”, which adds two new products to the portfolio: boilers and manual lawnmowers. In 1919 the company starts to manufacture their own engines.

1921-1949:  Becoming a househole name  The expansion continues with a number of household appliances, such as the first electric Husqvarna stove, dishwasher and washing machine.

1947-1959:  The first motorized mowers – and chainsaws  The first motorized Husqvarna lawnmower for commercial use is launched in 1947, and in 1959 the first homeowner model reaches the market. A busy year for Husqvarna – as it also marks the year of the first chainsaw. The Husqvarna 90 was shaped by iconic Swedish designer Sixten Sason and used motorcycle muffler technology to achieve lower noise levels than its contemporary competitors.

1967:  Good-bye rifles   In 1967 Husqvarna presents its last hunting rifle, the 1900-series. The weapon was regarded as ahead of its time and became a model for civil weapon manufacturers worldwide. Even now, most modern hunting rifles are based on Husqvarna’s innovative bolt construction.

1969:  Anti-vibratoin  The Husqvarna 180 chainsaw is released, featuring a new ground-breaking anti-vibration function that prevents decreased blood circulation for forestry workers around the world.

1972:  New Name  -  New Look  The company name is officially shortened to simply “Husqvarna”, which is implemented along with the current logo.

1973:  Safety first  The Husqvarna 140 chainsaw is introduced. The world’s first chainsaw with an automatic chain break.

1982:  Paris-Dakar  A Husqvarna motor bike (MC 258) wins the 250 cc class of the legendary Paris-Dakar rally. The machine was initially built for the Swedish army, but when the French army started to show interest as well the bike was signed up to demonstrate its high performance. Thus, the model used was not modified in any way – apart from a larger gas tank and a saddle designed for longer rides.

1985:  The year of the rider  The first prototype of what is to become the Husqvarna Rider is born.

1986:  The end of an era  The Husqvarna motorcycle division is sold off.

1988–1990: Overseas success   The US becomes Husqvarna’s biggest market for outdoor products, and via a new acquisition the company introduces American garden tractors in Europe.

1989: Taking the throne  The 3120 XP is introduced, one of the world’s biggest and most powerful chainsaws to date. It becomes an instant favourite amongst loggers and has seen numerous updates since.

1995: The birth of the robotic mower  Husqvarna launches the Solar Mower, the world’s first fully robotic lawnmower, running on nothing but solar power. A predecessor to the popular Husqvarna Automower®.

1997: Focus  The sewing machine production is sold entirely, leaving the company to focus solely on their two main areas of expertise: outdoor and construction equipment.

1999: TrioBrake™  The TrioBreak™ feature, enabling users to activate the chain break with the right hand, is introduced in 1999 – further reducing the risk of injury for forestry workers.

2012: The battery revolution – and more… Chainsaws, trimmers, hedge trimmers and an all-new Rider. Husqvarna’s battery revolution offers an entire range of products with petrol performance – yet emission-free and with a lot less noise, vibration and maintenance. During 2012 Husqvarna also receives a number of great prizes such as “The Red Dot Design Award”, “The Quiet Mark” and gold, silver and bronze medals at the “World Logging Championship”.

2013:  The robotic revolution  The third generation of Husqvarna Automower is launched with the 330X model being able to remember where it has already mowed by using GPS, adapting to weather and seasons as well as detecting narrow spaces and adjusting to them.  Stay tuned for the next breakthrough in outdoor power tools…